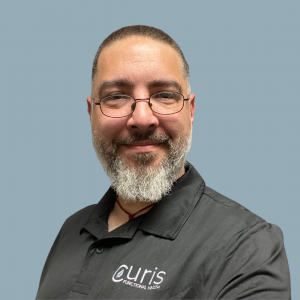 Dr. DuChene started his pre-medical training when he was enlisted the United States Air Force. He graduated with a Doctor of Chiropractic degree, in 2008, from Parker College of Chiropractic in Dallas, Texas. While still in school he obtained his diplomate certification in Bio-Energetic Synchronization Technique and was one of the only five distinguished students chosen to represent the college as an intern at the VA Hospital in Dallas.
Dr. DuChene has utilized a stress, nutrition and trauma model to his chiropractic care from the beginning of his personal practice in 2008, to joining the Curis family in 2021. He has trained in various chiropractic techniques to provide multiple answers to help get you out of pain and he trained in multiple rehab and exercise techniques, to keep you out of pain.
Dr. DuChene has a wide range of training in nutrition. Some of his training ranges from a more naturopathic nutrition approach to a more testing based approach. He has experience with genetic nutrition, weight loss, functional testing and blood testing.
Dr. DuChene has been active in his community. He has participated in multiple outside screenings, programs and classes educating the public one-on-one on the benefits of Chiropractic and nutrition. He has been interviewed in several venues including The Business Spotlight, and on 92.9 The Ticket. One of his interviews is published in the book: Business Environment & Entrepreneurship: Changing the way business is conducted in DFW and all of North Texas.
I decided to become a Chiropractor after an injury I had in the military. I had a back injury from a martial arts move. I went to the base hospital and they gave me some medication for the spasm in the back. The medication helped, to some degree, the pain and problem. But, it also almost stopped my heart. After that incidence, I stopped that. The pain was mostly better, until I got out of the service. My back pain turned into a sharp stabbing pain in the back and I could not lift something more than 30-50 pounds without severe pain in the back. I went to my dad’s Chiropractor and after the first couple of weeks, I was mostly pain free. This is the point that I decided that I want to become a Chiropractor. I have had several other personal experiences along the way that validated my want to serve people through Chiropractic.