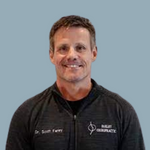 From an early age, Dr. Farley suffered from migraine headaches but thought nothing could be done until being knocked unconscious while playing a football game. Dr. Farley was taken, to see a Chiropractor, who treated him thus eliminating the headaches, allowing him to return to the sport that he loved. From that point, he knew that he would become a Chiropractor.

Dr. Farley serves as the Oklahoma Chiropractors Association President and founding Board Member.

In 2015, Dr. Farley was awarded the Doctor of the Year from Pinnacle Chiropractic Management Group.