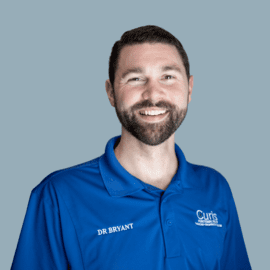 Dr. Michael J. Bryant received his Doctorate of Chiropractic Degree from Parker University in 2015. He was raised in San Antonio and completed his undergraduate studies at The University of Texas at San Antonio.

Dr. Bryant has seen the power of Chiropractic his entire life. He was raised in a chiropractic family. His father and uncle are both Chiropractors. He met his wife, Brooke, at Parker University, who is also a Chiropractor.

When he is not in the clinic, he enjoys spending time with his family, fishing, and watching his favorite sports.

He has a passion for helping others and strives to help as many people as he can. His patients vary from all stages of life from pregnant mothers and newborns to teens, adults, and athletes. He is trained in a number of techniques including: Diversified, Thompson, Activator, Gonstead, and Webster Technique.